Luckily, I stumbled upon a newspaper ad where a company was looking for a secretary.  I phoned and asked if I could drop off my resume.  Since it was close to my parents’ place, I brought my daughters along, dropped off my application and then went to my parents for a visit. As soon as we were about to go home, I received a call. The woman told me that the manager was calling me in for an interview the next day. My family, kids and I were as excited as we could imagine.

The next morning I asked my mother to look after my children while I went to my interview.  When I arrived to the address that the lady gave me, I was surprised to find myself in a residential area with old Spanish vintage houses. They stood around me with their beautifully designed eight-foot high gates with crafted loops on top surrounded by seven-foot high white-coated 2x2 foot large brick walls.

These houses were like the ones I saw in the movies where the gang leader lived! Oh my God, it was so creepy.

At that point I thought I misunderstood the address, so I thought I might as well ask if I had the right place. As I approached the gate, a shiny black 1987 Bluebird tinted car gave a quick honk at the gate and a security guard opened it. When the car drove past, I peaked inside and saw a long driveway with a cream painted veranda and big mahogany doors, thick and etched nicely but I could not figure out what design was on there.

All of a sudden the back window rolled down and the man in his 30s said, “You must be Annie, come on in!”

I was stunned and said, “Yes.”  I followed the car and the security man stopped me to sign in and leave my identification. I deliberately handed it to him and signed the visitor’s book. I saw a lot of names listed as I quickly browsed the logbook.  He must have taken many interviews beforehand, but I was the first on that day.

I looked at the guard and asked, “Who was that man?”

He said, “He is Mr. Tamara, the owner of this company. What is your purpose here? Would you please indicate on the reason column.”

I replied, “Ah I see, so I’m not lost then. I have an interview with him.”  I signed and he guided me to the front door. Once inside, I was surprised to see rows of tables and chairs of the same colour and style, and people were doing different things at each table.  I recall seeing approximately 20 people and everyone was busy.  I quickly scanned the area and saw one person on the phone, others talking to the person next to him, one was heading to a white coloured photocopy machine in the corner, and some were working away.

As we walked pass them, we went through a sliding door and the guard asked me to wait on one of the small couches. Then he approached a lady with a short bob hair cut with a portion of her bangs teased up that you see in the 80s. She was wearing a solid pink blouse and navy blue slacks, he spoke to her, gave me a grin and left.

She looked at me and said, “You may come in now for your interview.”

I stood up and composed myself. “Thank you, Miss.” I went in and saw the same man from the car sitting in his chair with his arms leaning on the largest table I have seen in my life. His head was bowed over my application.  I did not wait for him to greet me, instead I said “Hello, Sir. I’m Annie”. 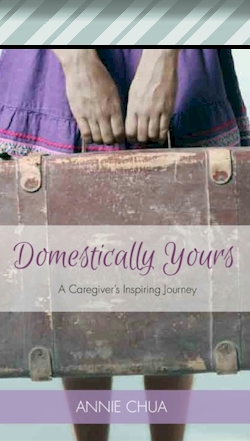